Tuesday (Jan 28/27 Shevat):
It was a normal Tuesday evening.  Finish Pardes classes at 5, frantically run to the bus stop, ride around Jerusalem for about an hour, sit through my lady learning class, talk to Rav D, go home angry.  But on this particular night, I left thinking "ma nishtana ha'lila ha'zeh?"  Why was this night different all of a sudden?  Simple.  It included a great quote from RavD:  "I can tell this process is causing you a lot of pain.  Okay, we'll get to the Beit Din within the next month.  Actually, there's a girl who's supposed to go on Thursday but she doesn't have all of her papers yet.  Are you ready to go on Thursday?"

Thursday (Jan 30/29 Shevat):
I think it's safe to say that I spent the entire morning pooping.  "Being nervous" doesn't even begin to explain it.  RavD called me several times beforehand to go over some of the questions that I needed to know and then spent about 20 minutes convincing me of all the reasons why people should be shomer negiah.  Then I convinced him that of course I can't wait to make aliyah and live here forever.  It was a really heartfelt conversation.

Anyway, the time came to leave for my appointment.  RavD and Zvi (or Rav Zvi as I was instructed to call him that day) met me at the office...and then it was go time.  There was a whole lot of Hebrew and giggling going on between the 5 rabbis sitting in that room.  It gave me some time to breath, but then the questioning started.  One of the Beit Din (BD) rabbis (with their knit kippot and short beards) would ask a question in Hebrew, Zvi or RavD would translate, I would answer in English, Zvi or RavD would translate back, and then I'd get a funny look from the BD.  I was asked about which brachot a person would say over certain foods, why women are obligated in Hanukkah but not in Hallel during Hanukkah, what things are added into davening and birkat hamazon during Rosh Chodesh (which started Thursday night), how to properly shect a cow (including how long to salt the meat for), and difficult questions about the Gemara that we had spent all of 2 days learning in class.  Zvi only had to jump in 2 times to inform the BD about their unfair questions.

I think my favorite part was seeing their reaction to the fact that not everyone in the Conservative Movement keeps kosher.  Their heads nearly exploded.  It was amazing.

They told the 3 of us to go back to the waiting room as they discussed the verdict.  After a significant amount of time, RavD decided he was going in to find out why they were taking so long.  After a couple of minutes, he came back out to inform us that they were debating about me learning in a mixed gender environment.  Obviously a person's Jewish status should be based upon whether or not they learn with cootie-infested boys...

Finally, we were called back in.  They explained their concerns to me and I convinced them that I'm truly against mixed learning, avoid chevrutahing with guys, and from here on out plan to only engage in Torah study in all female institutions.  So maybe it was immoral to lie to the BD.  I can't say I really care.

I made a declaration that I accept all of the mitzvot, said Shema, and received a piece of paper with three signatures on it.  Zvi and I walked outside.  He davened mincha while I bawled my eyes out.  And that was that.

Wednesday (Feb 5/5 Adar1):
My mikva appointment was at 9:15AM in Hod HaSharon.  That meant waking up at 5:30, getting to the central bus station around 6:30, jumping on another bus for an hour, and taking a mini stroll to find this building.  Everything was going smoothly until I sat down on the bus and realized that one of the BD rabbis was sitting right behind me.  This was by far the most terrifying thing.  I decided against eating any of the bus snacks I had for fear that he might ask me brachot questions and made sure to say tefilat haderech as we (I think) left Jerusalem.  Then I decided to be a rebel and listened to a podcast from a mixed learning environment (chas v'shalom!).

As soon as I got to the building, they had me go into a lovely room with a toilet, shower, sink, and chair.  The first woman to come by (we'll call her A) started giving me instructions in Hebrew.  When she realized that wasn't working, she told me to shampoo and put on towel.  Naturally, I didn't bring a towel (who doesn't bring a towel to the mikva!?) so she went to get one.  That's when the second woman (we'll call her B) came in.  She looks at my watch and tells me to take it off.  Then she motions towards my scarf and proceeds to help remove it.  I didn't think I needed to tell her this, but I have experience in undressing myself.  I really didn't need her.  Finally, A comes back with a towel and the two of them leave me.  When I was all shampooed and fully undressed (no thanks to B) they came to retrieve me.  We walked across the hall with nothing more than a towel on and they told me to walk into the mikva.  Let me tell you, there's nothing weirder than being butt naked in front of two super frum women.  But the water was SO warm so nothing else really mattered.

The initial (official?) dunking was quite simple:  Hold on to the underwater bar, fully immerse, resurface, get out of the water.  Then it was time to put on my tribal gown: 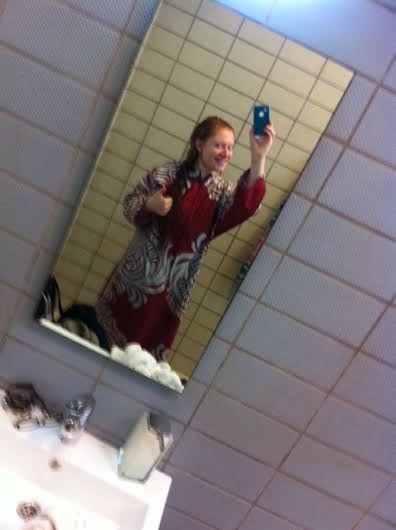 Now that I was properly dressed for the occasion, it was time to jump back into the water and wait for the BD to arrive.  I'm not sure if you've ever worn a dress in a pool before but, thanks to the laws of nature, they generally have a problem staying all the way down.  A and B kept telling me to pull it down.  That didn't work so well...the BD got a little leg action.  Whatever.

I dunked again, said a bracha, they said mazal tov, the BD left, and I got out.  We walked back across the hallway and then B bear hugged me while dripping wet in my gown.  She kissed me on both cheeks, said another mazal tov, and then left me.  Not entirely sure why she thought I'd be able to manage getting redressed by myself, but I succeeded nonetheless.

I walked back to the bus stop and that was that.
I'm officially a part of the cool kid club.
Posted by Unknown at 1:13 PM