Just a bunch of stones

Well, angelfish, the solution to your problem is simple.  The only way to get what you want is to become a human yourself.


It was 1:53PM Monday afternoon as I stood outside of Pardes dialing the Jewish Agency.  When the call ended 4 minutes later, I felt so distant from this country and the people living here.  All I wanted to do was fly home and get away from it all.  Why?  Let's go back to the beginning.

The bearded old men say I'm not Jewish according to Jewish law.  Okay, fine.  I appreciate Jewish law from an Orthodox perspective and can accept that.  But I didn't just accept it.  I came to believe it.  So the men tell me that I need to go through another conversion process.  It's my understanding that the most widely accepted way is through the Rabbinate.  Wonderful, I can do that.  A not-so-bearded, not-so-old friend tells me that to make things easier, I need to prove my eligibility for making Aliyah.  No big deal.  I just need a couple of documents and everything will be wonderful.  So I get in touch with the Jewish Agency on this beautiful Monday afternoon.  It should have been a simple conversation but, as I came to learn, things are never simple with the Jewish Agency.

It doesn't really matter what was said during the phone call.  What does matter is the fact that I've never felt so distant from this community.  Israel is the country I pray about multiple times a day.  It's the place that every Jew can call home and feel welcomed in.  Yet, because a bunch of bearded old men claim that I'm not Jewish, I'm pushed farther and farther away.  So now I'm stuck.  I've been convinced to believe that I'm not Jewish and now obstacles that seem impossible to overcome are thrown in my pathway.  This isn't the land I've prayed about.  How am I supposed to deal with all of this?

Early Tuesday morning we left for the Pardes tiyul (trip) to the Negev.  It took all of 5 minutes for me to feel connected again.  Here we were surrounded by barren land, free of all politics, bureaucracies, and the bearded old men.  The next three days helped to put everything in perspective- this was the land that I prayed about.  This is the place where Abraham circumcised himself, Isaac was bound to Hashem, and Moses freed the Jewish people.  The barren land we traveled through gave life to the Jewish nation.

Last week's parsha was Vayeitzei.  We learn about Jacob's journey of leaving his home, falling in love with his cousin, jumping through hoops to marry said cousin, ending up with two wives and twelve kids, and eventually gaining the courage to stand up to his father in law.  Aside from the crazy love affairs, I connected deeply to this parsha.  I was reading an article (thank you Chabad) that zoomed in on Bereishit 31:46:

Jacob builds a wall (pile) to separate his land from Laban's land.  Neither they, nor their descendants, will be able to cross over these stones for the sake of war.  The word the Torah uses for pile can also mean reveal (לגלות).  There's a Chasidic teaching that says this border can be seen as a separation between the sacred and mundane, yet sometimes it's necessary to cross this border in order to reveal the holiness in an ordinary world.

For me, the cross into the desert felt like exactly that- Jerusalem lost its holiness until I was able to discover what lied beyond its borders.  The גל, the pile, helped me regain a sense of balance to jump back into this fight with the bearded old men.  B'ezrat Hashem, it won't take me 14 years to reach my goal, but I'm back in the game for the long run.

Ready or not, here I come. 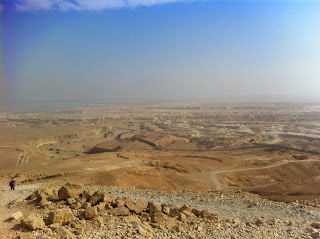